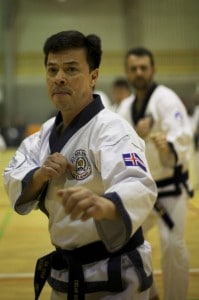 César, as he is called in Iceland, was born in Mexico City, and he started training under Ramiro Guzmán, SBN Dan Bon 16354 , José Torres Navarrete, SBN Dan Bon 17640 and Dai Won Moon, Dan Bon 2814 in the year 1973. At that time the line between Soo Bahk Do and Tae Kwon Do was not yet drawn, so truthfully he started training Corean Karate (TANG SOO DO), as our Art was known back then. For many years he trained under Dai Won Moon and eventually became part of the Tae Kwon Do Mexican National Team, where he stayed for 15 years. He achieved twice a silver medal in World TKD Championships and after retiring from competition, opened his first Tae Kwon Do School in Mexico City, called Absolut Tae Kwon Do. He still has a few schools under this name in Mexico City and the surrounding areas.

Accomplishments: He started teaching in early 2009, he introduced Soo Bahk Do to a small group of his students.  In 2007 he did his transfer examination, where he received the Dan Bon 44158. In 2010 was then when, finally Soo Bahk Do was established under its correct name and with a specific training schedule in Iceland, and during the same year César SBN was named Designee for Iceland by H.C. Hwang, KJN. César Rodríguez Luna, SBN was a Candidate for Sa Dan and Sa Bom during the 6th. Euro Ko Dan Ja Shim Sa in Greece, held from the 1st to the 7th of April, 2012.  Founding Member of the Iceland Soo Bahk Do.