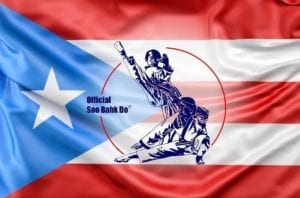 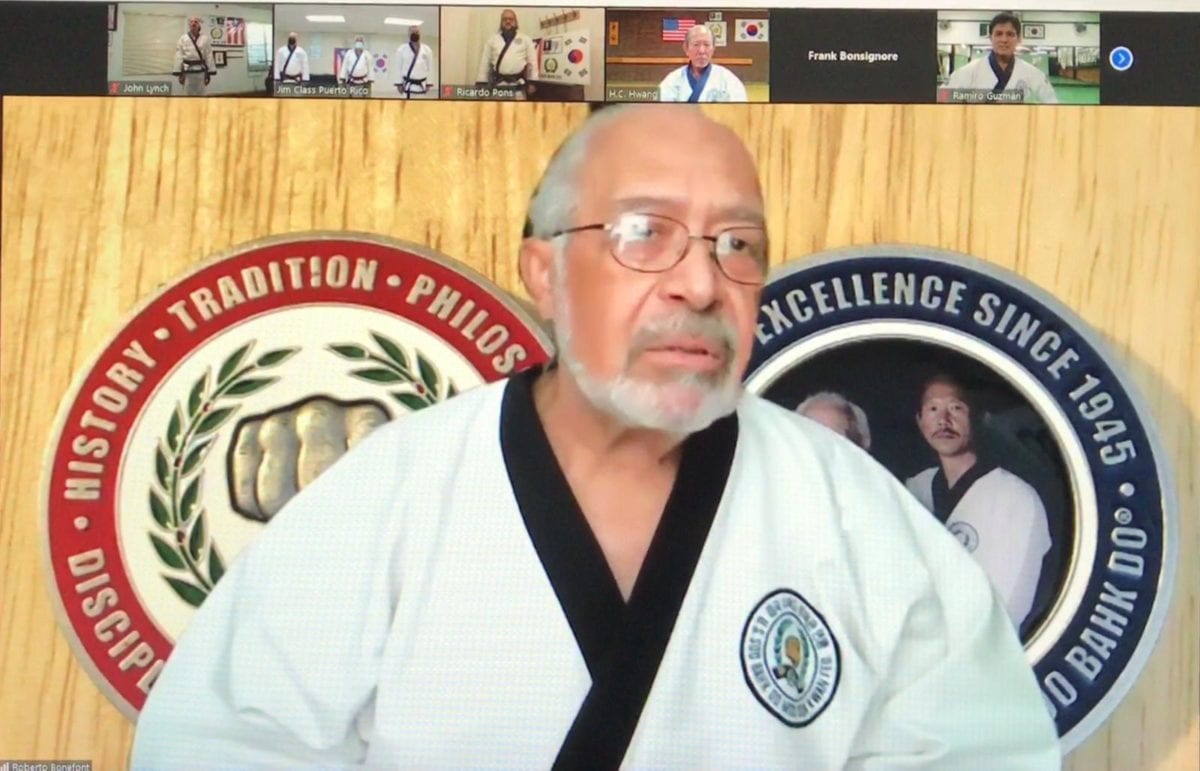 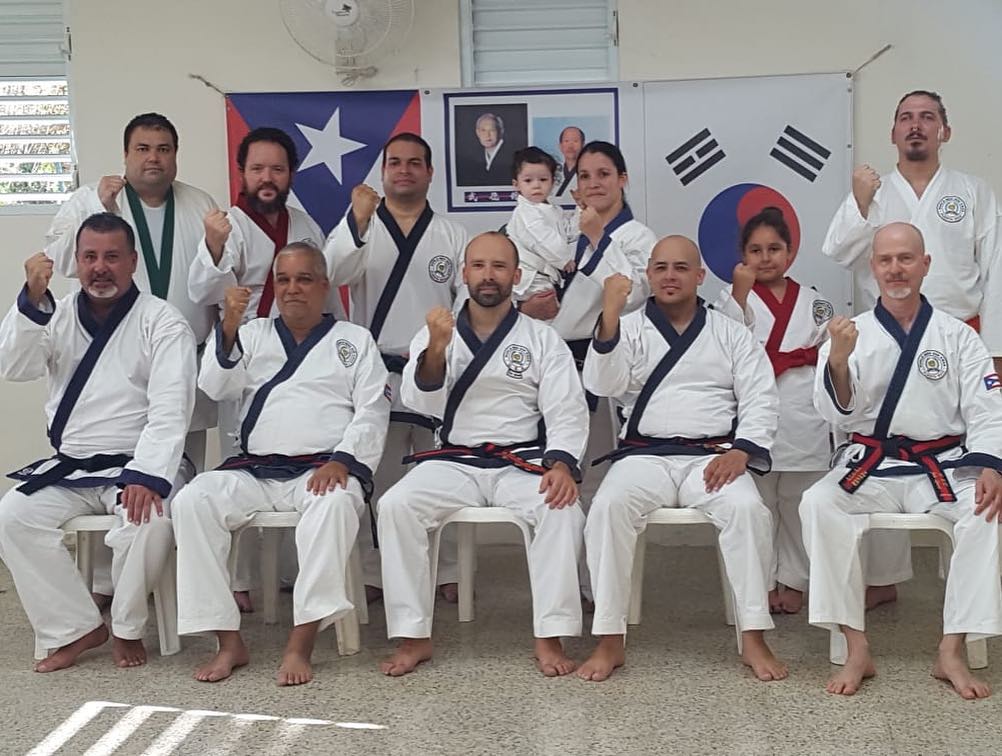 The presentation ceremony started with our traditional opening ceremony with the Kwan Jang Nim and senior Ko Dan Ja in attendance. 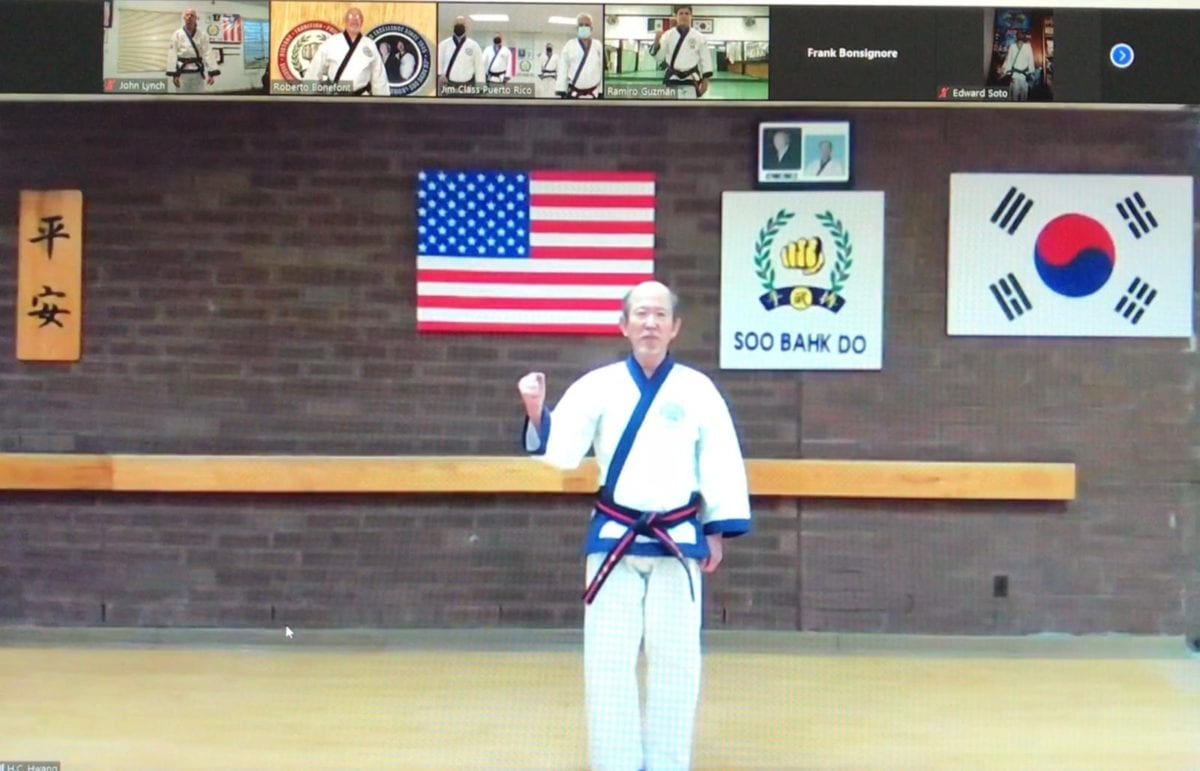 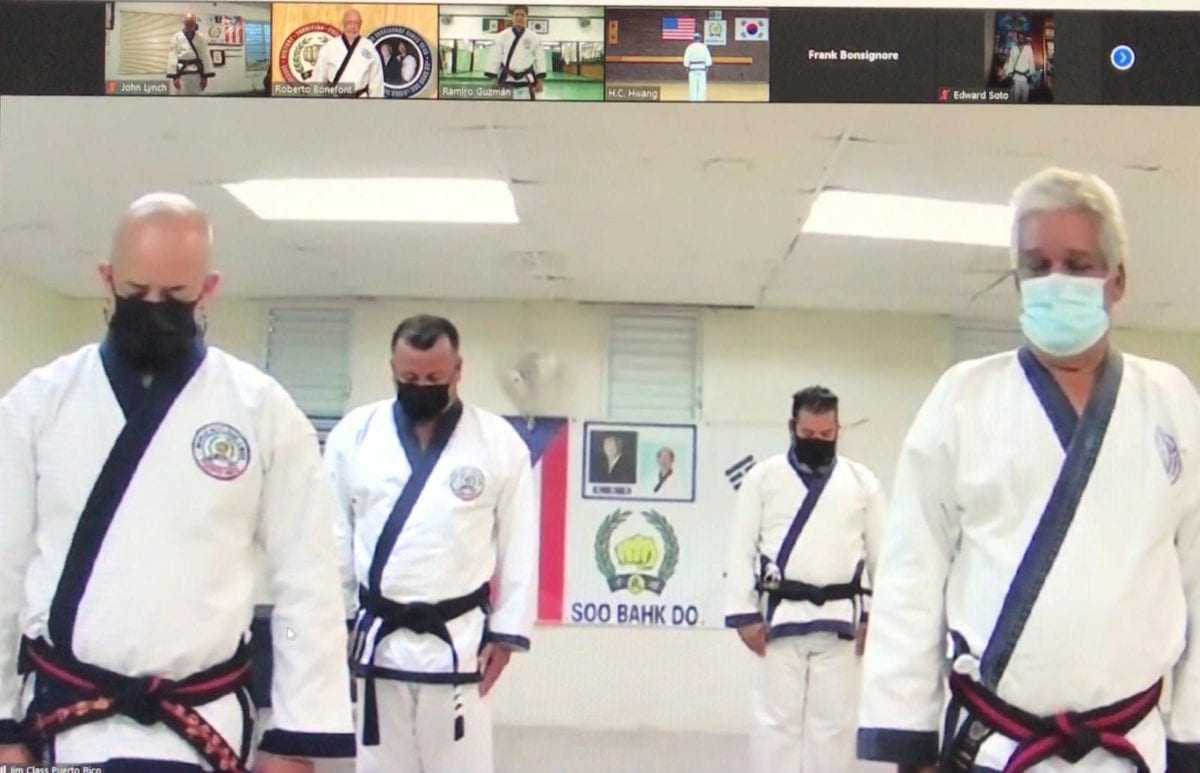 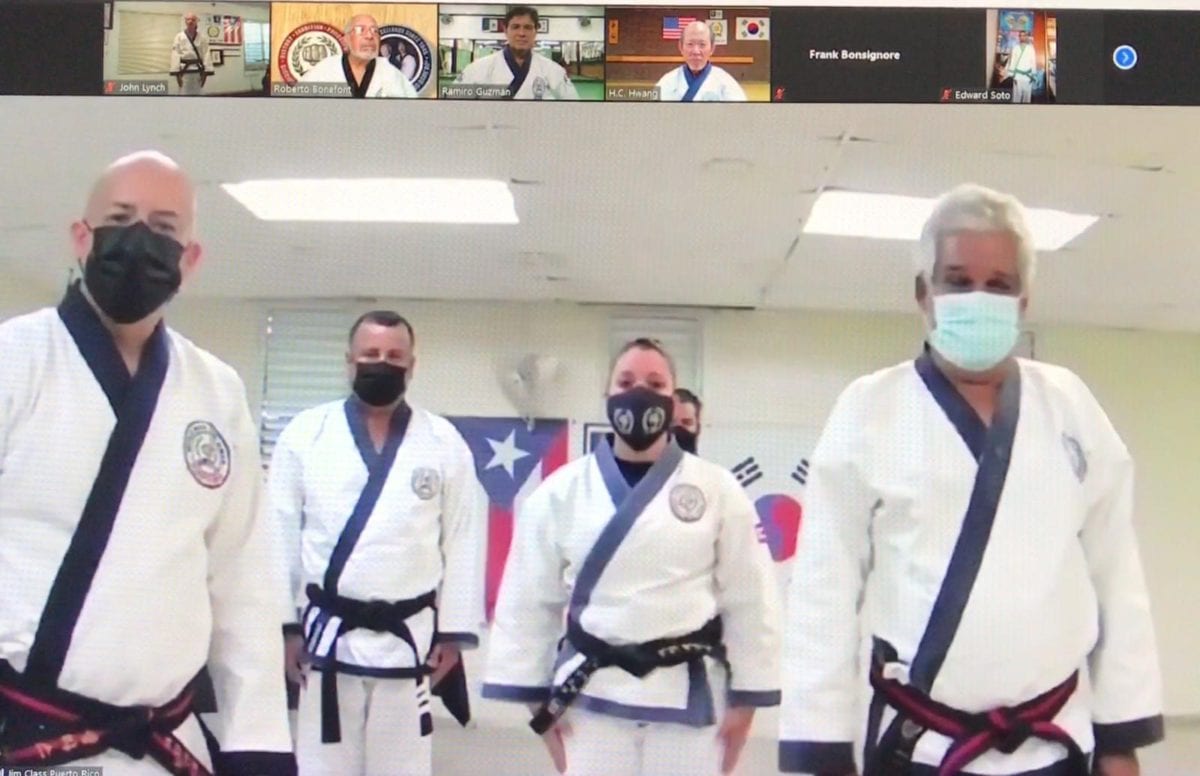 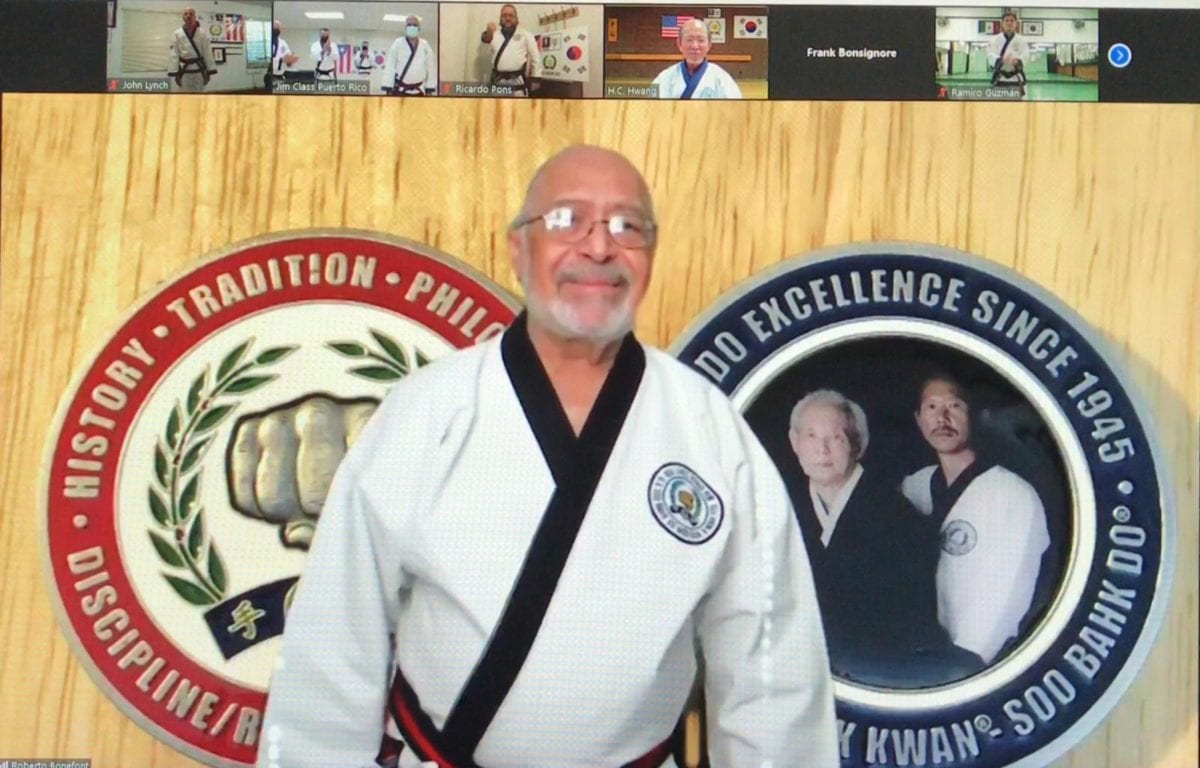 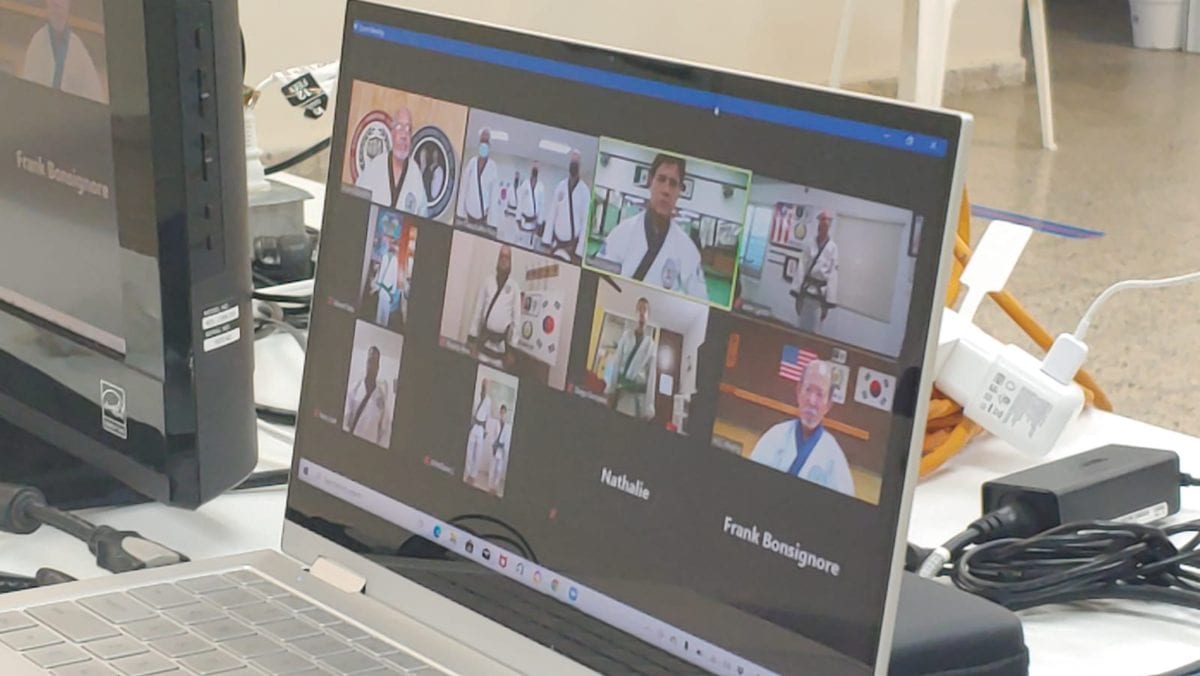 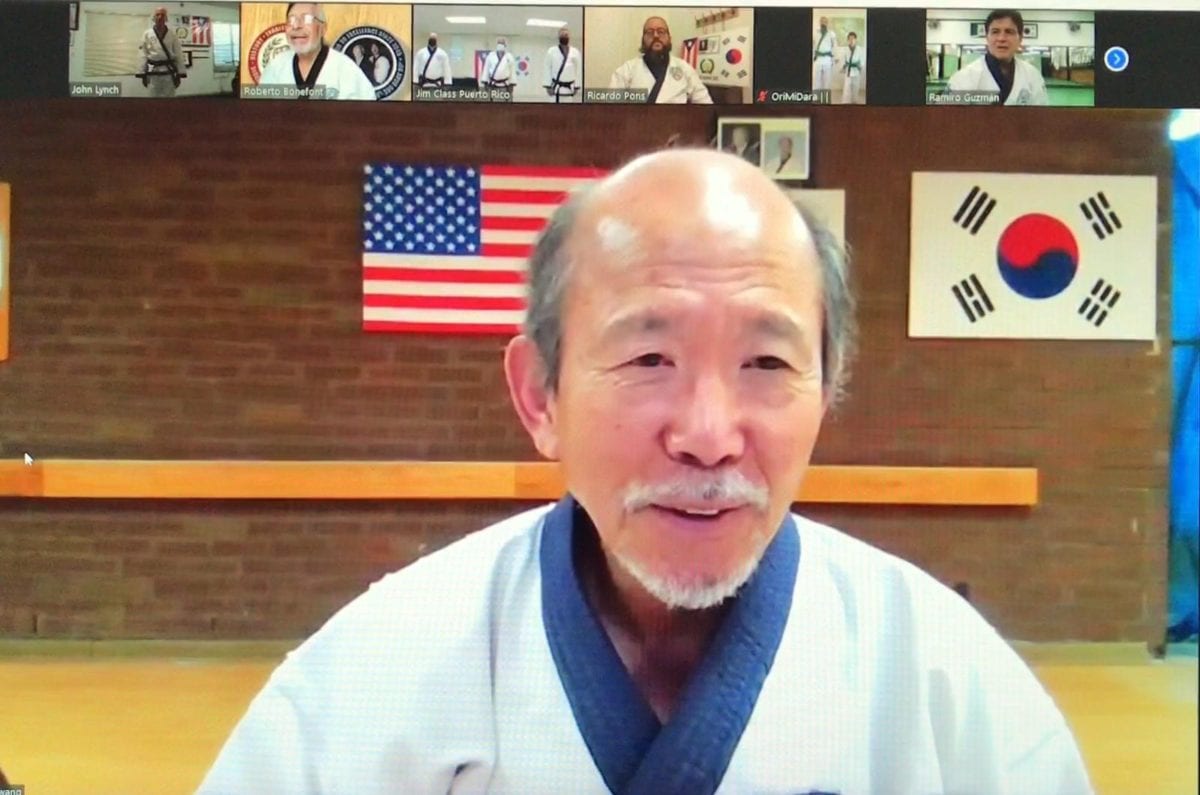 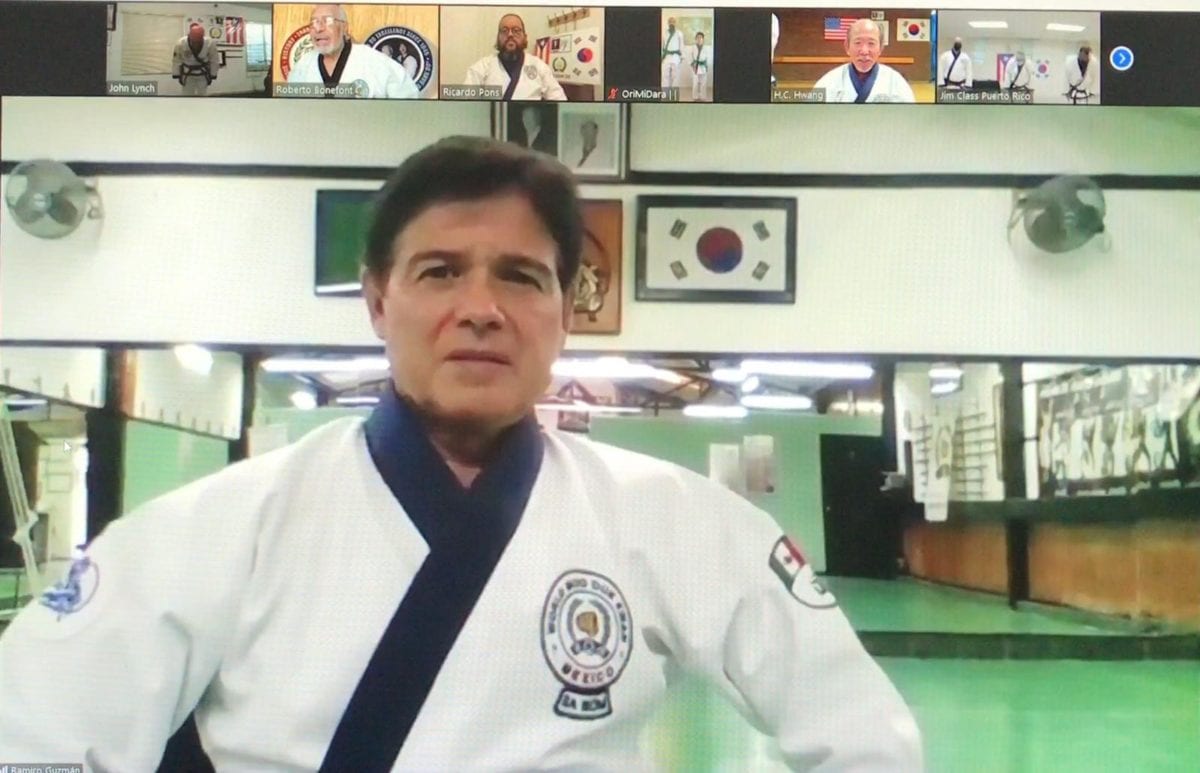 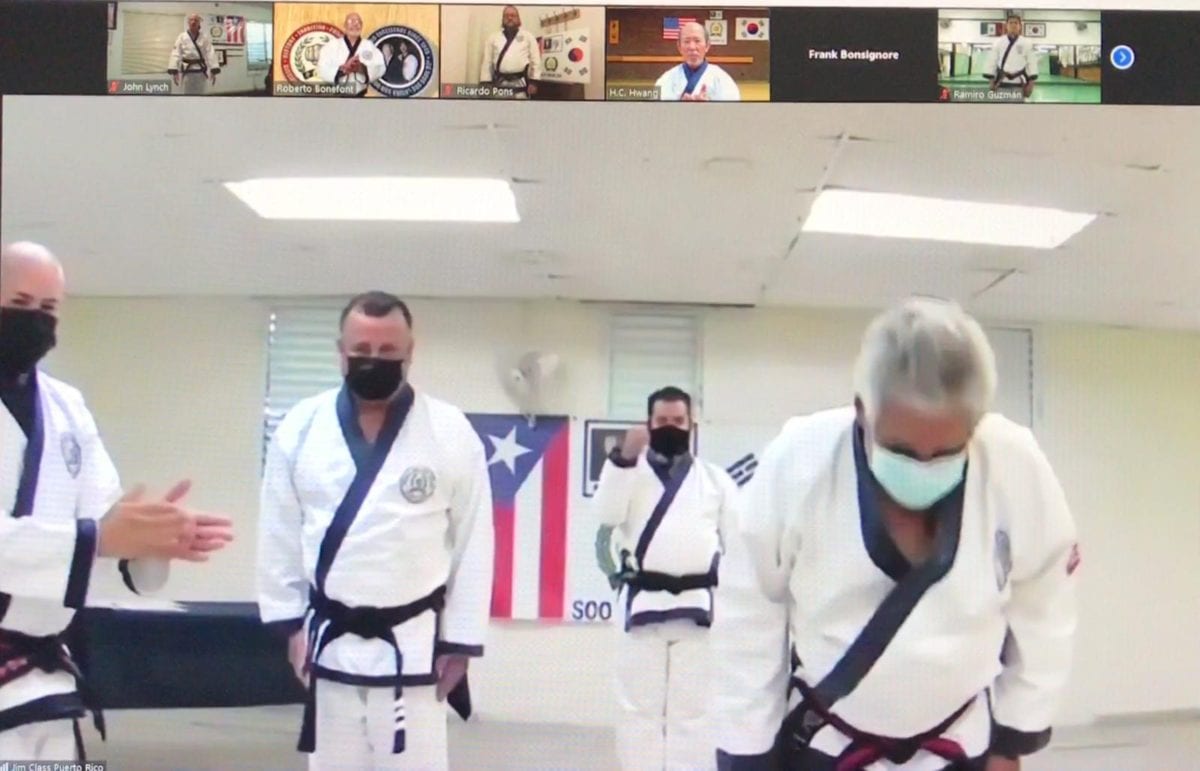 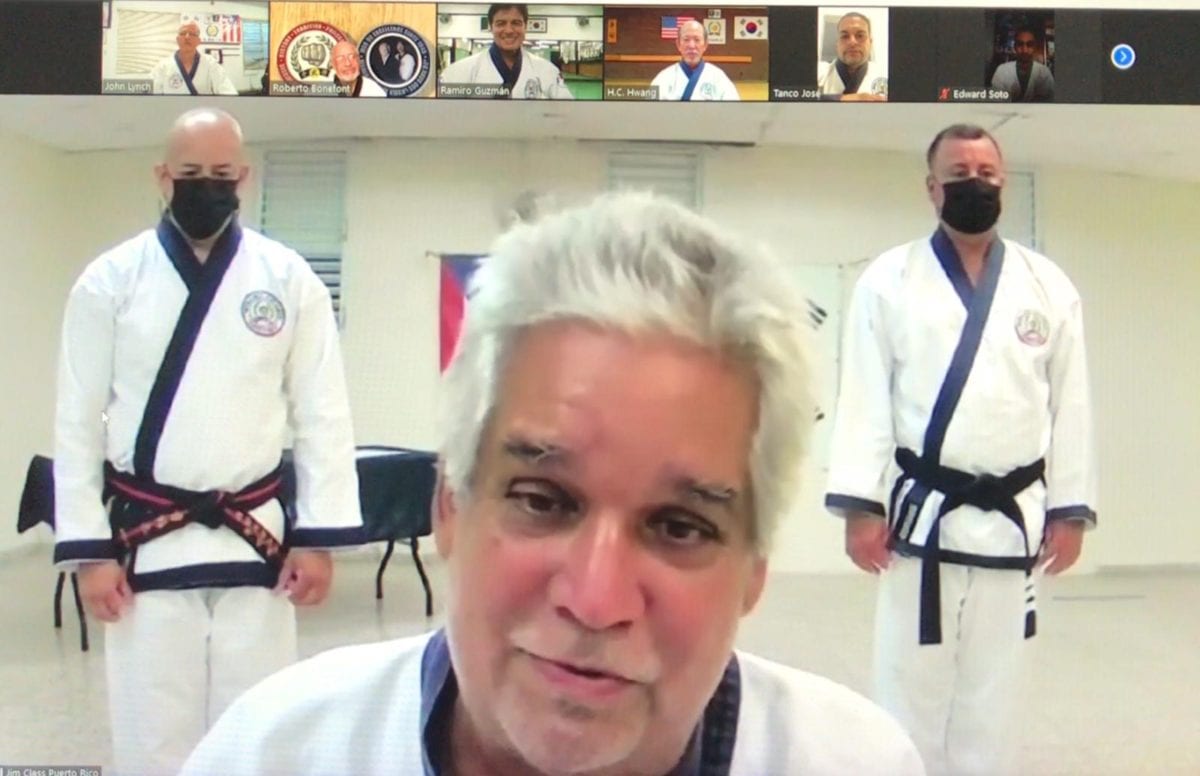 Master Lazu was presented by Kwan Jang Nim with his Sa Dan promotion Certificate #31628.  Master Lazu had been granted Master level by his former instructor who was not representing the World Moo Duk Kwan® at the time.

To officially recognize all his accomplishments, dedication, sacrifices, and his loyalty to the World Moo Duk Kwan®, he was honored with his Sa Dan certificate, announced in Korean by Frank Bonsignore Sa Bom Nim, and handed to him by his current Sa Bom Nim instructor and designee for Puerto Rico, Jim Class, Sa Bom Nim, O Dan.  This presentation was done virtually through a Zoom video session between Puerto Rico, New York, New Jersey, and Mexico. 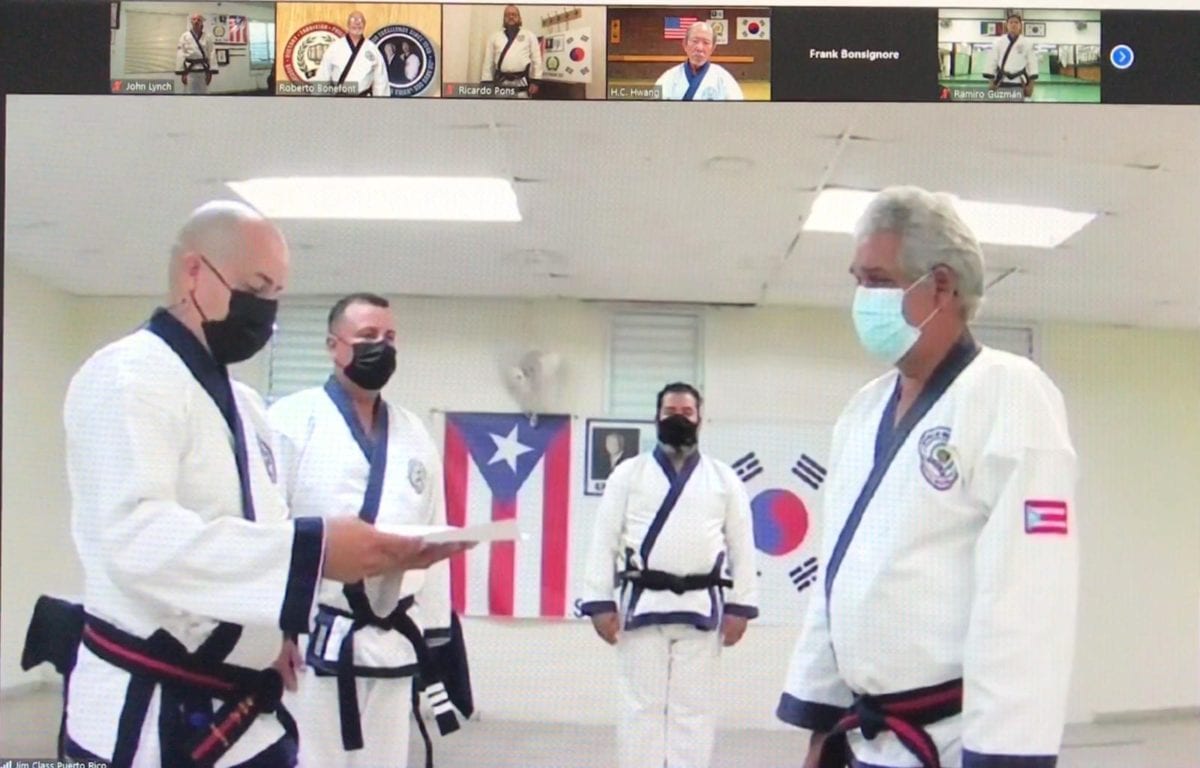 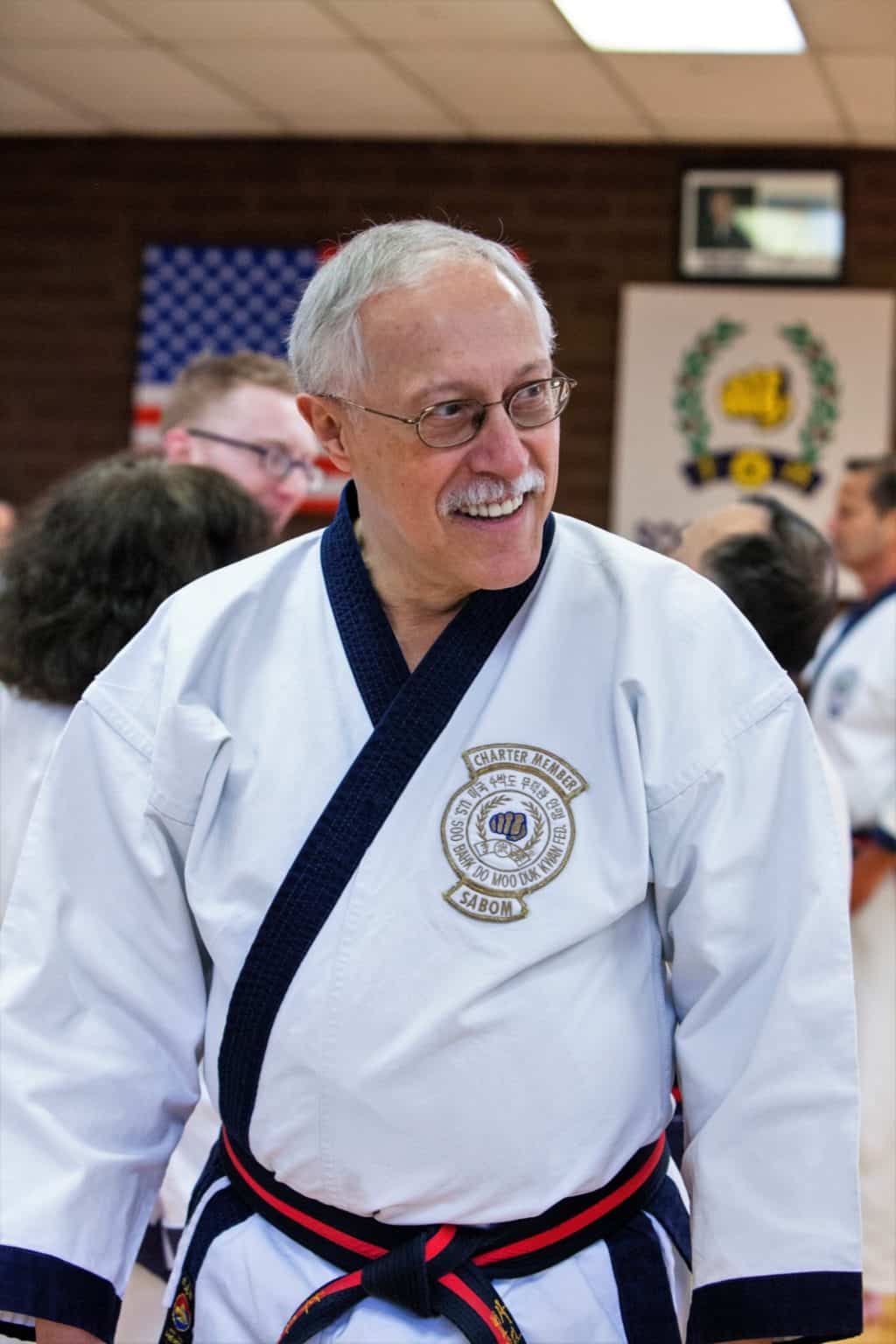 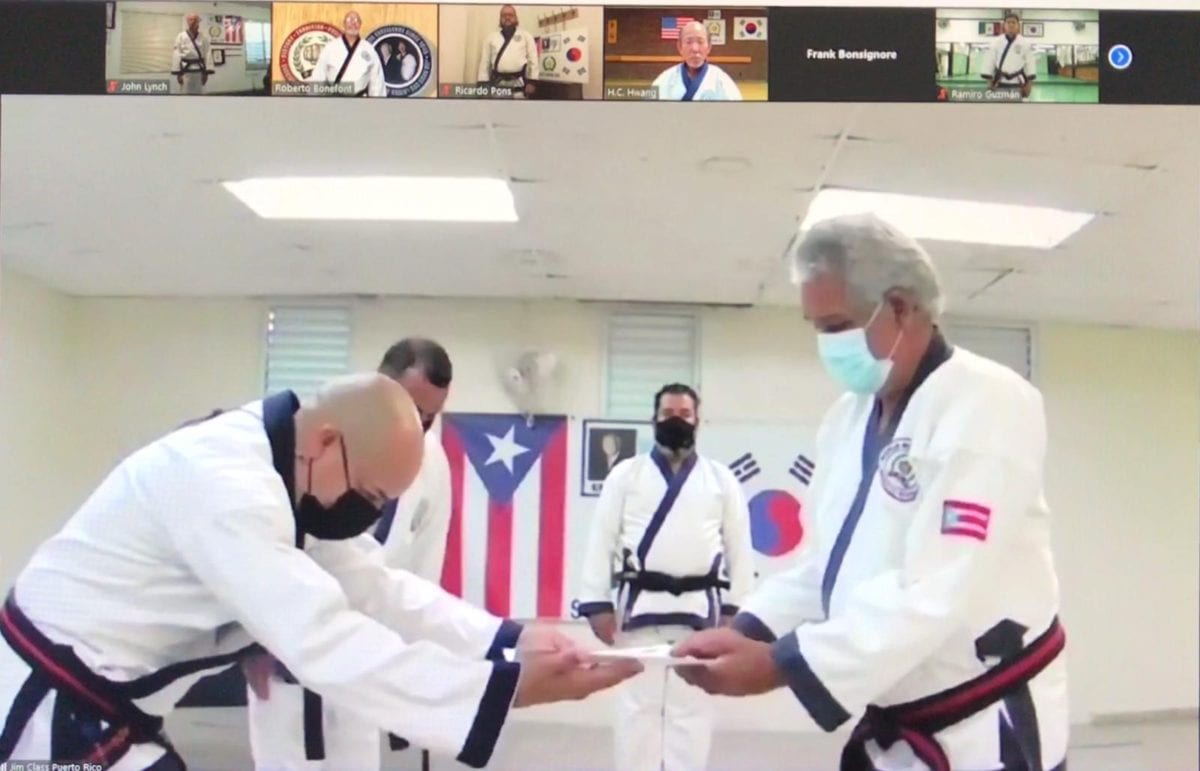 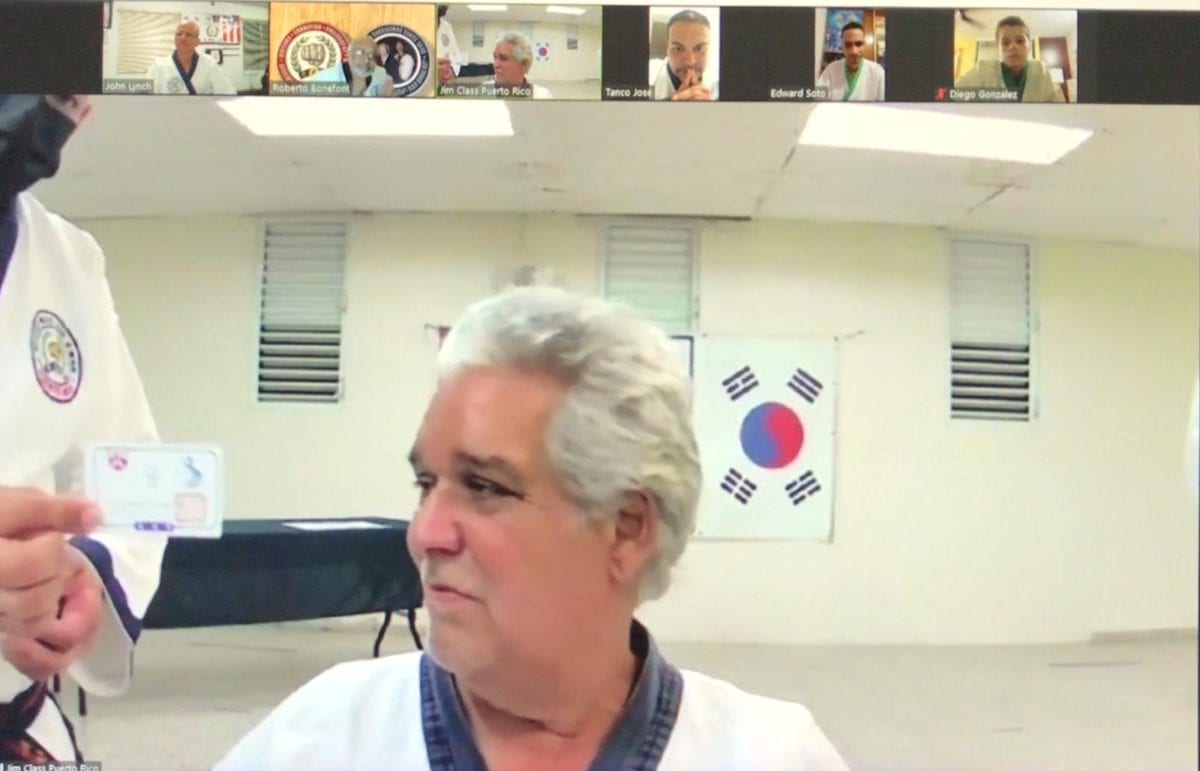 After the certificate presentation, Kwan Jang Nim spoke directly to Master Lazu (who is legally blind, and has loss of hearing) speaking about Master Lazu's long history with the development and his dedication to continue the Moo Duk Kwan®being present on the Island over the many years of his dedication.  He spoke about Master Lazu's strong shim gung during the difficult years of government and financial pressures he overcame to license the organization with the government of Puerto Rico Sports Authorities.

In 1997, Kwan Jang Nim first visited the island of Puerto Rico, to evaluate the situation in Puerto Rico and the Moo Duk Kwan®, which had lost its connection to the late Founder and our current Kwan Jang Nim.  At that time, Mr Lazu had hosted the visitation of the Kwan Jang Nim and his two companions during the visit, Bonsignore SBN and Mr. Bonefont. 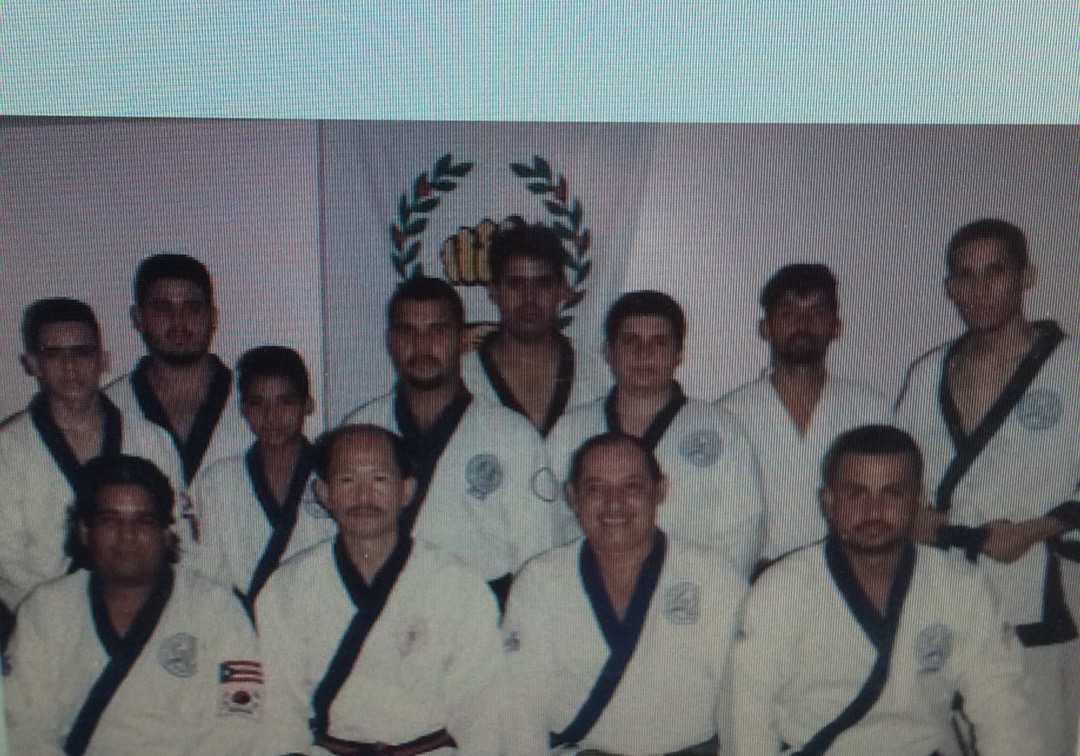 Kwan Jang Nim;s first visit to Puerto Rico ... seated to the right of Kwan Jang Nim is Master Jaime Lazu, far right is Mr. Morales Kyo Sa Nim, and in the standing row far left is Jim Class, Sa Bom Nim, at the time a young Cho Dan. This photo was taken by me after the special clinic conducted by the Kwan Jang Nim and Bonsignore Sa Bom Nim. 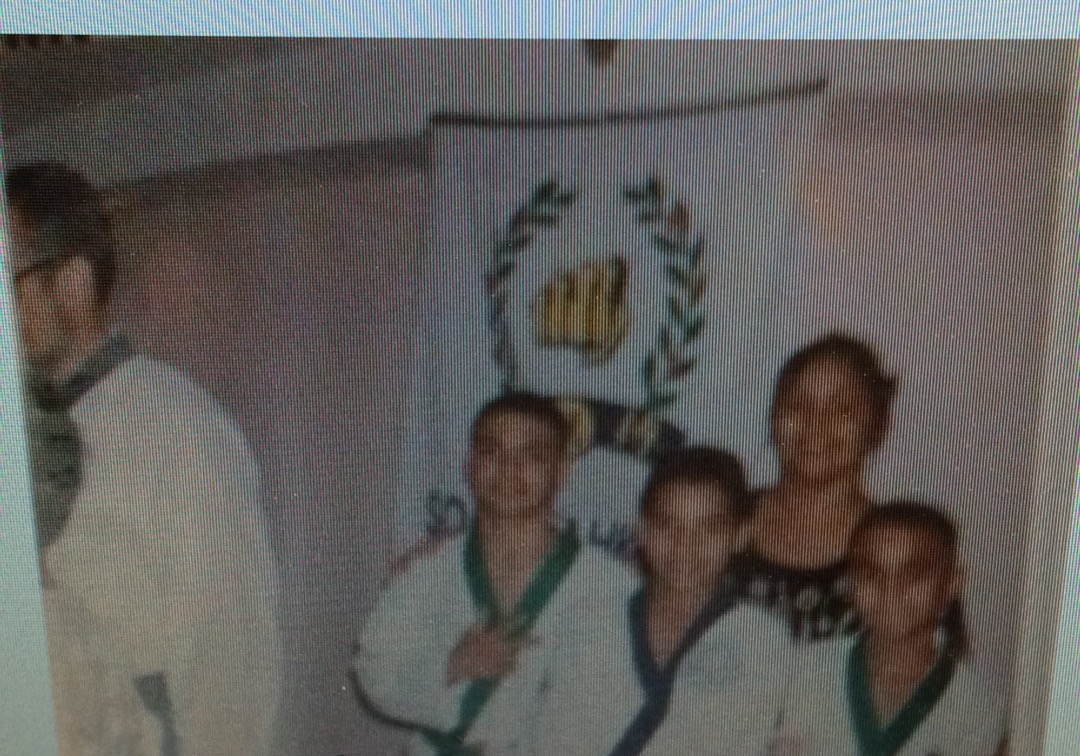 In this photo, far left in small group is Mr Jose Tanco, then a young green belt with his family. You can barely see my side and back standing on the far left.

Mr Lazu made most of the arrangement for transportation, reserved hotel rooms and organize the location for the Clinic taught by the Kwan Jang Nim at the time.  It was his goal to re-cement the roots in Puerto Rico to the World Moo Duk Kwan® again. 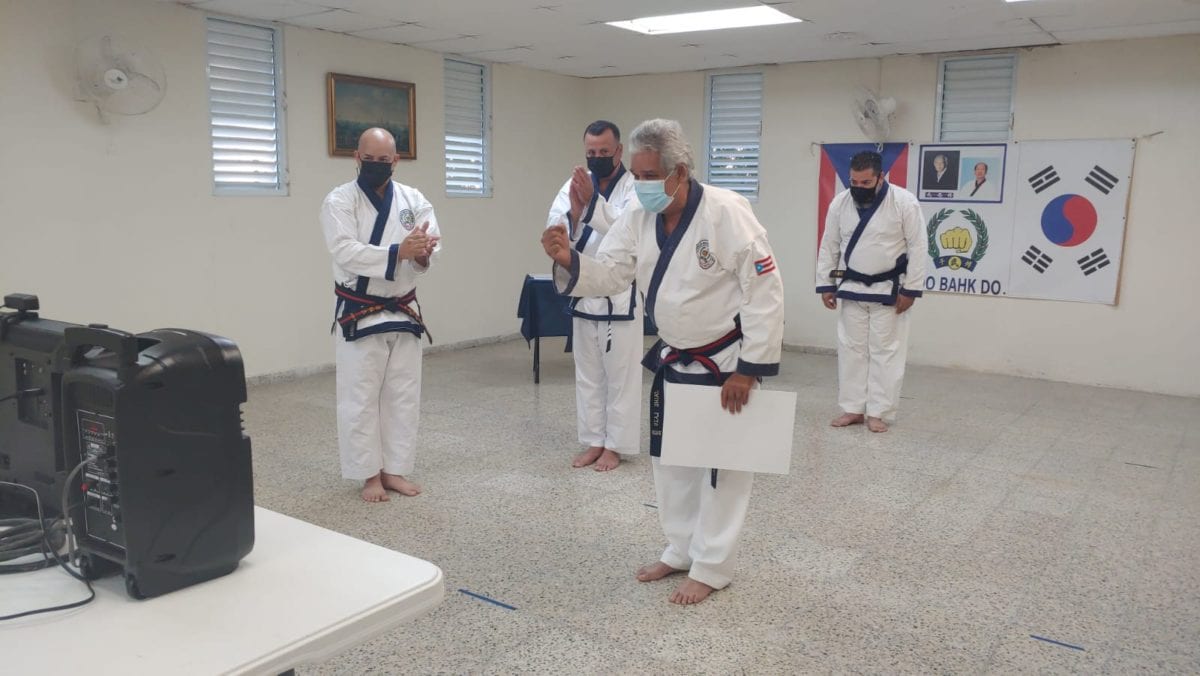 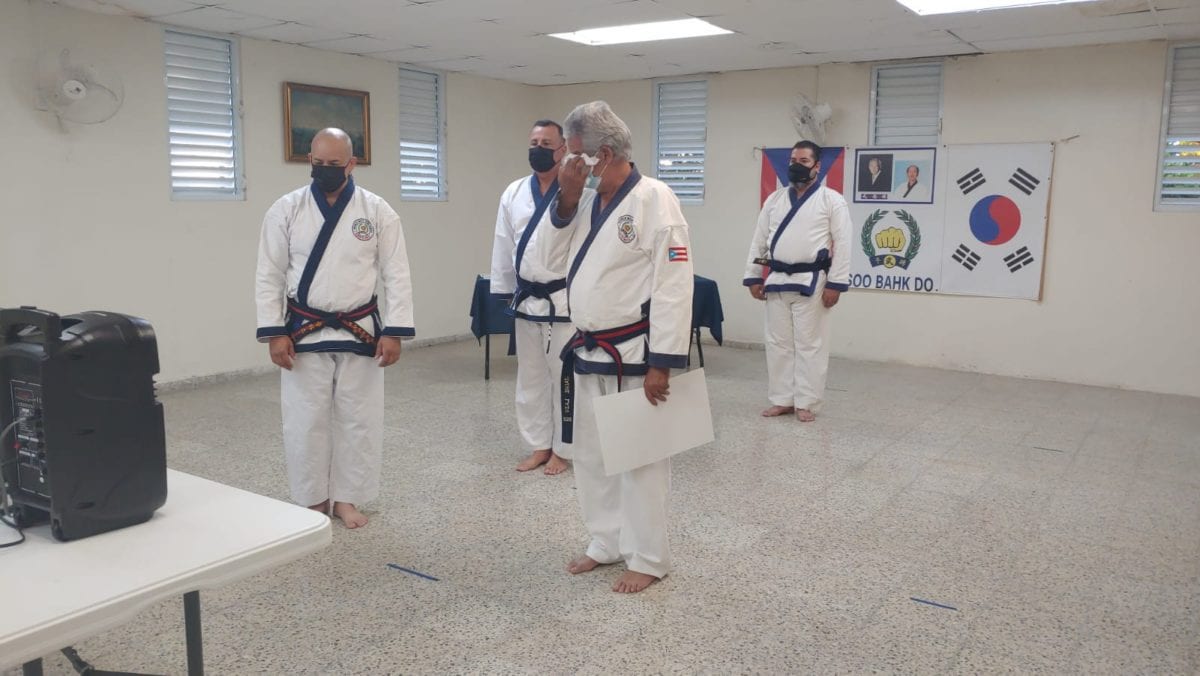 A very emotional moment for Master Lazu and his students in attendance. 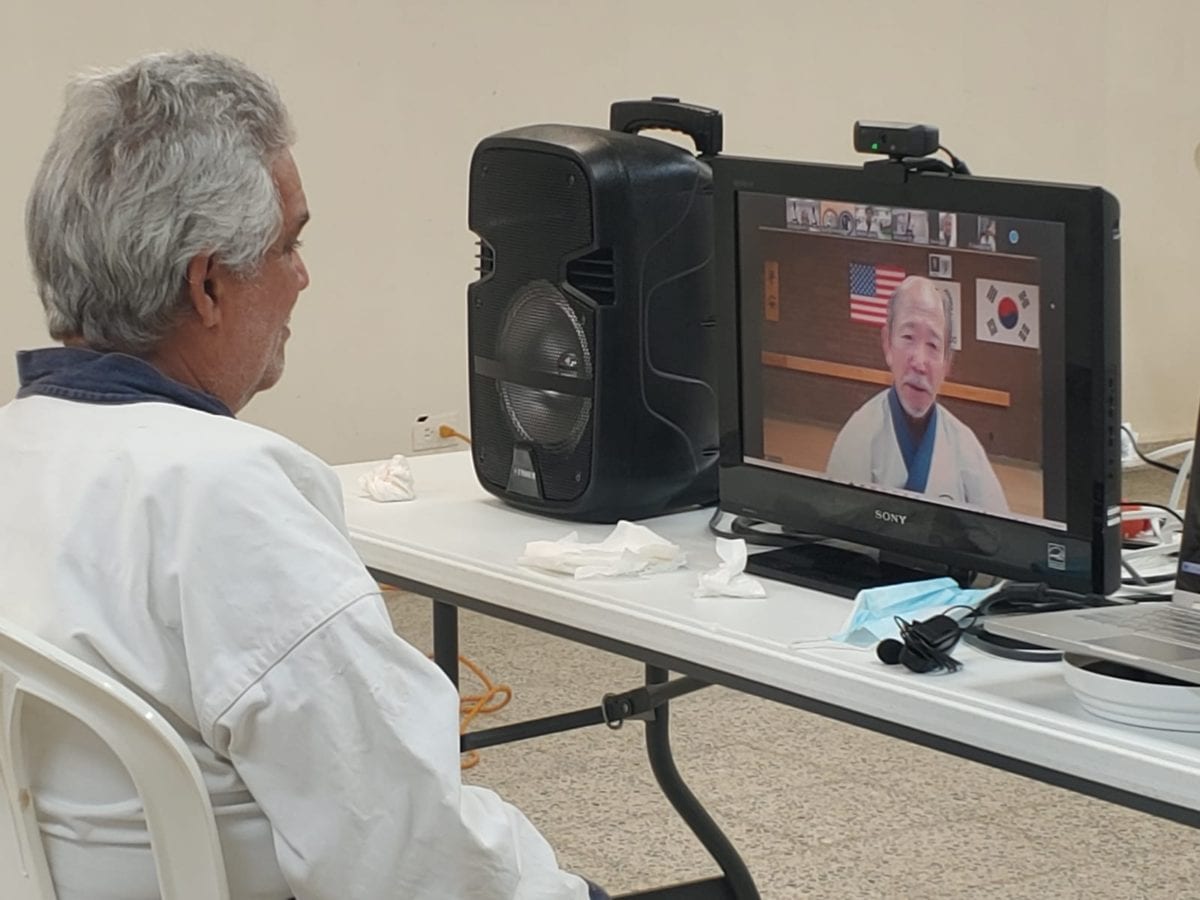 Master Lazu being congratulated by Kwan Jang Nim and honoring his dedication and service to the World Moo Duk Kwan® and Puerto Rico.

After the other senior Ko Dan Ja and Masters congratulated Master Lazu, Master Lazu addressed everyone in attendance, including many of his students.  He thanked the Kwan Jang Nim and everyone who attended the presentation, and spoke of his renewed commitment and promise to keep the Puerto Rico organization in the World Moo Duk Kwan®.  His former student, now designee for Puerto Rico, Jim Class Sa Bom Nim, gave an emotional history of his instructor and expressed how grateful he was to Master Lazu for his support in maintaining an active Moo Duk Kwan® in Puerto Rico. 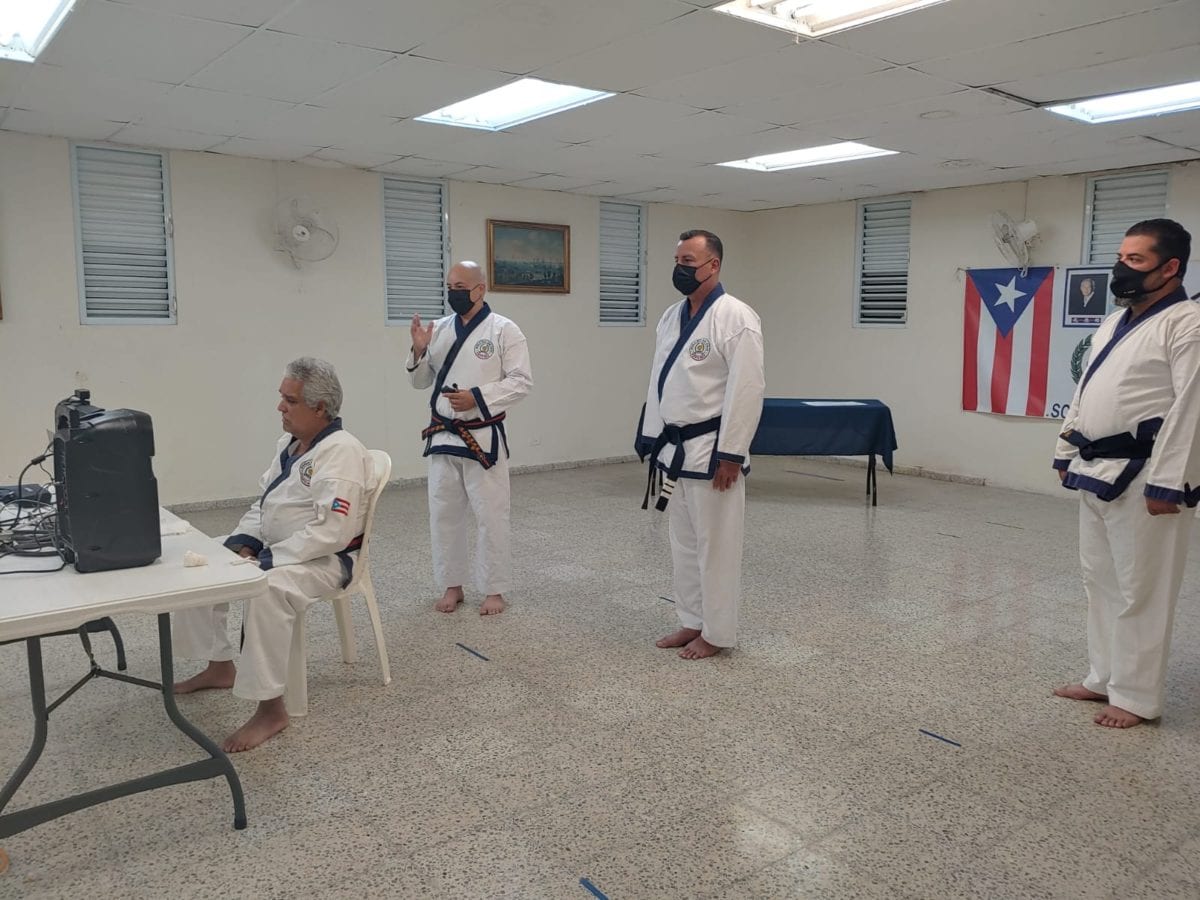 If there is to be a listing of Founding members of the Puerto Rico Moo Duk Kwan, surely Master Jaime Lazu will be on that list.

Congratulations, Master Lazu, Dan Bon #31628. He was given his Ko Dan Ja Certificate and Gold Pin in Puerto Rico.  There is only one Moo Duk Kwan®. 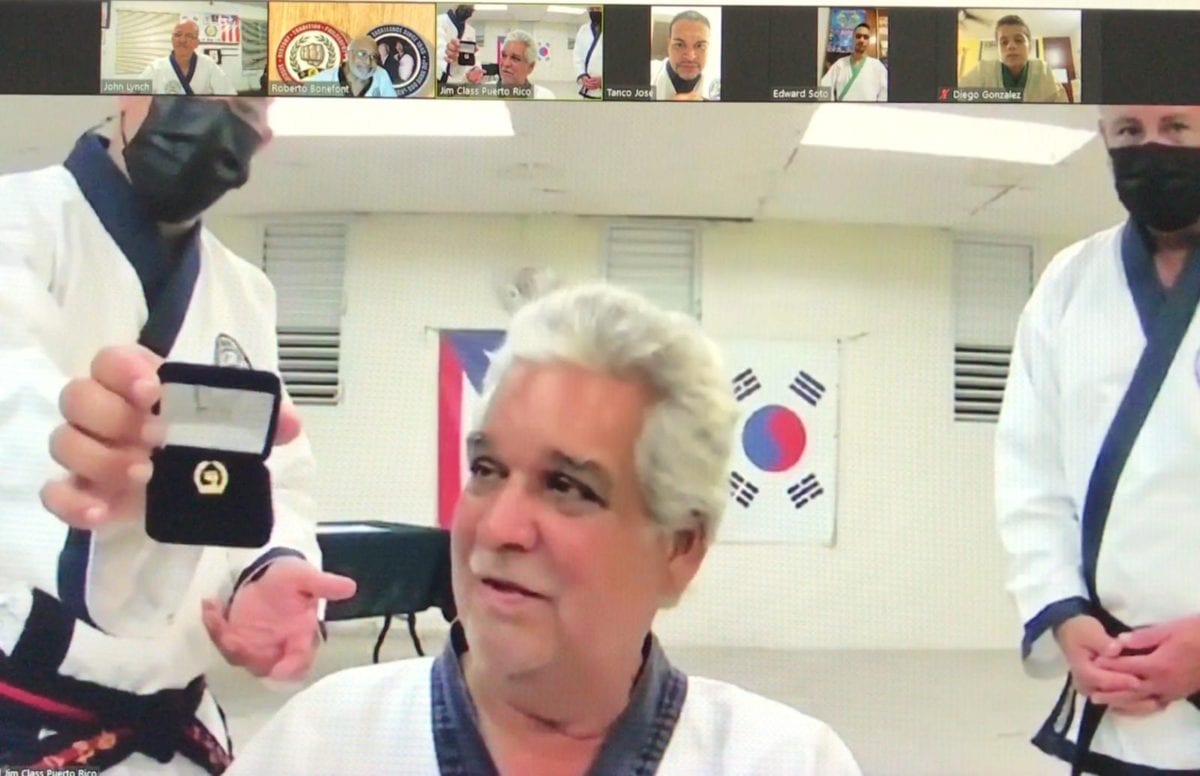 Master Lazu being presented with his KDJ Gold Pin, in the top of the picture you can see other participants, including on the far right, Master John Lynch, also a PR TAC member, who lives on another part of the island.

Thank you to Kwan Jang Nim, Bonsignore Sa Bom Nim, Hu Kyun In and US Federation Charter Member,  and Guzman Sa Bom Nim, World TAC member, Charter Member of the Mexican Federation of the Soo Bahk Do Moo Duk Kwan®, for making this a memorable event.  And our special thanks to all the students and senior dan and gup members who were in virtual attendance.  The ceremony ended with our traditional closing ceremony. 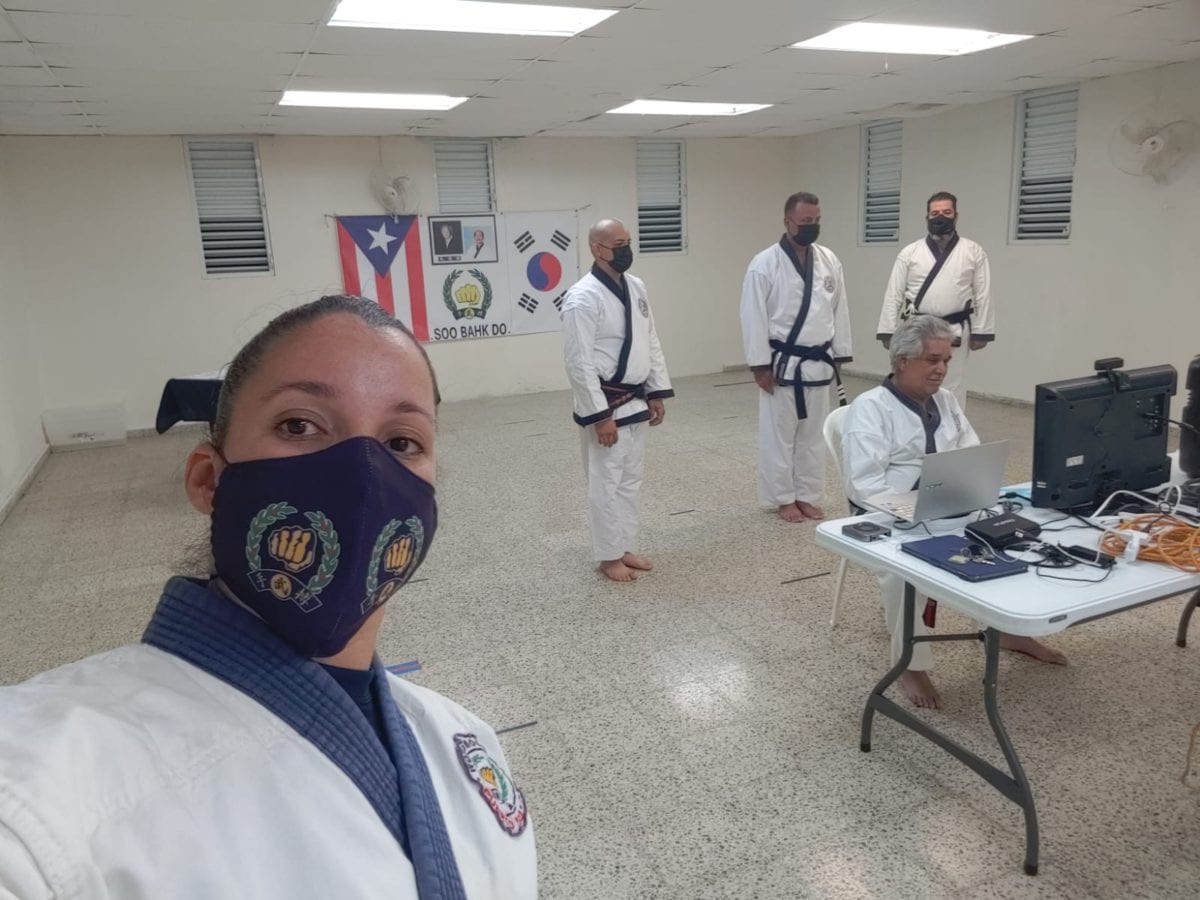 Special thank you and Gracias to Mrs. Class for taking the pictures and video of the ceremony. 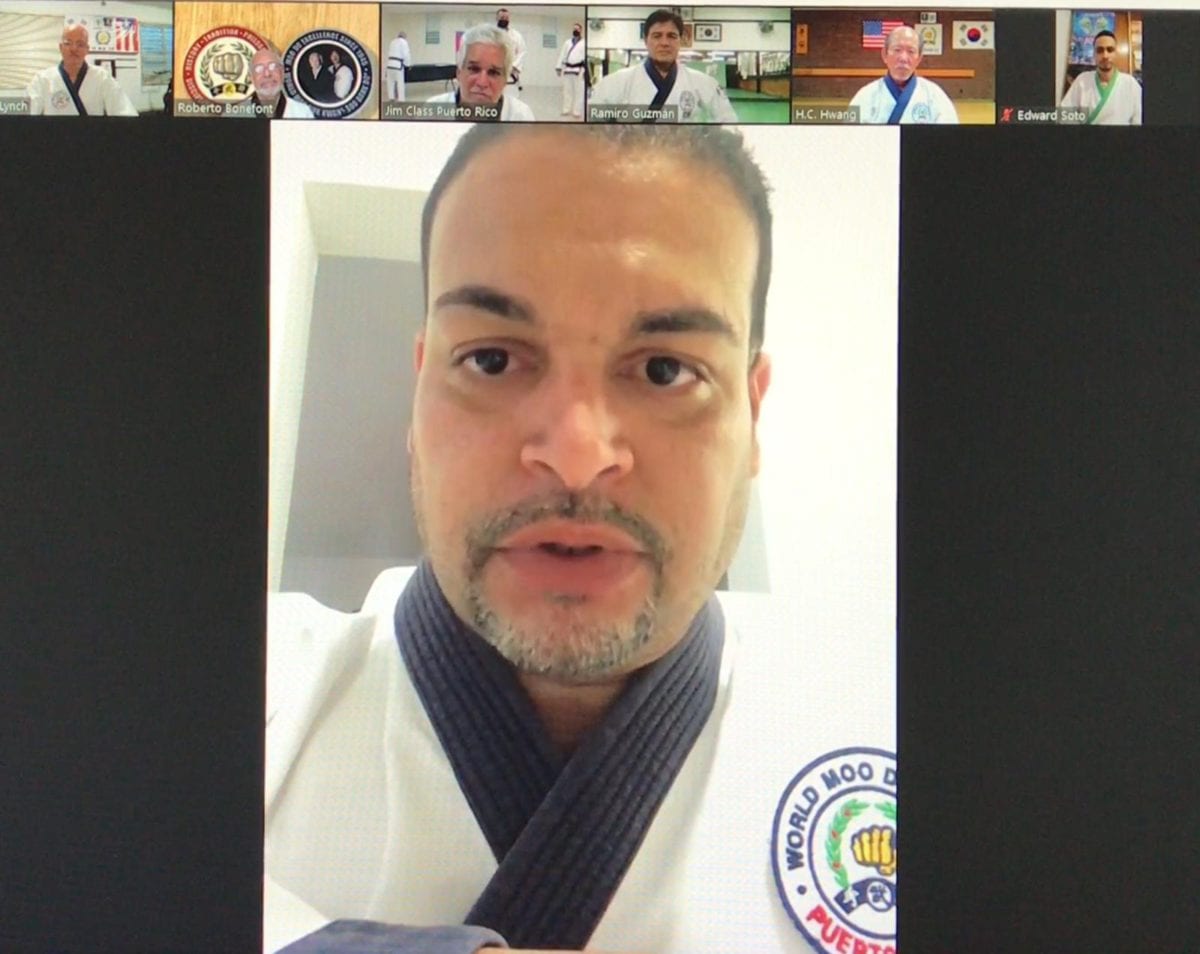 MR JOSE TANCO, TALKING ABOUT HIS INSTRUCTOR, MASTER LAZU AFTER THE PRESENTATION. 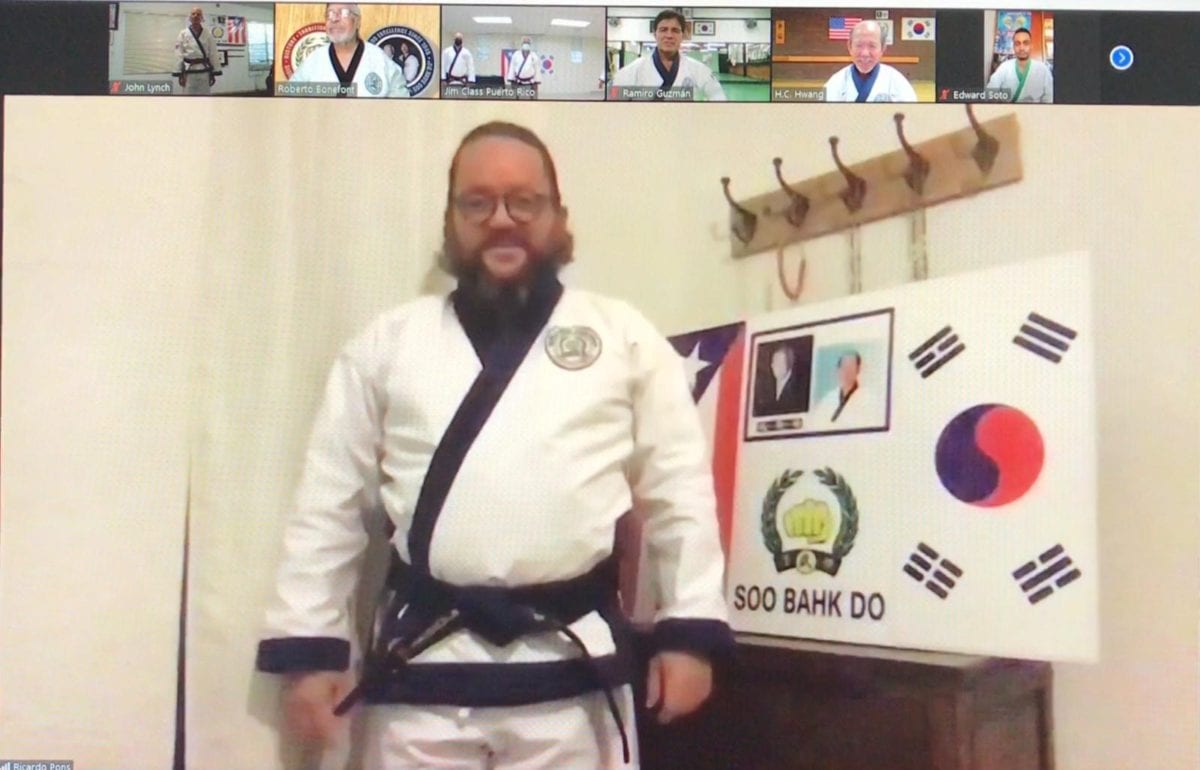 There was also another presentation to Master Lazu and Mr Morales Kyo Sa Nim, with their participation certificates for the 75th anniversary and a Kyo Sa certification for Master Lazu. 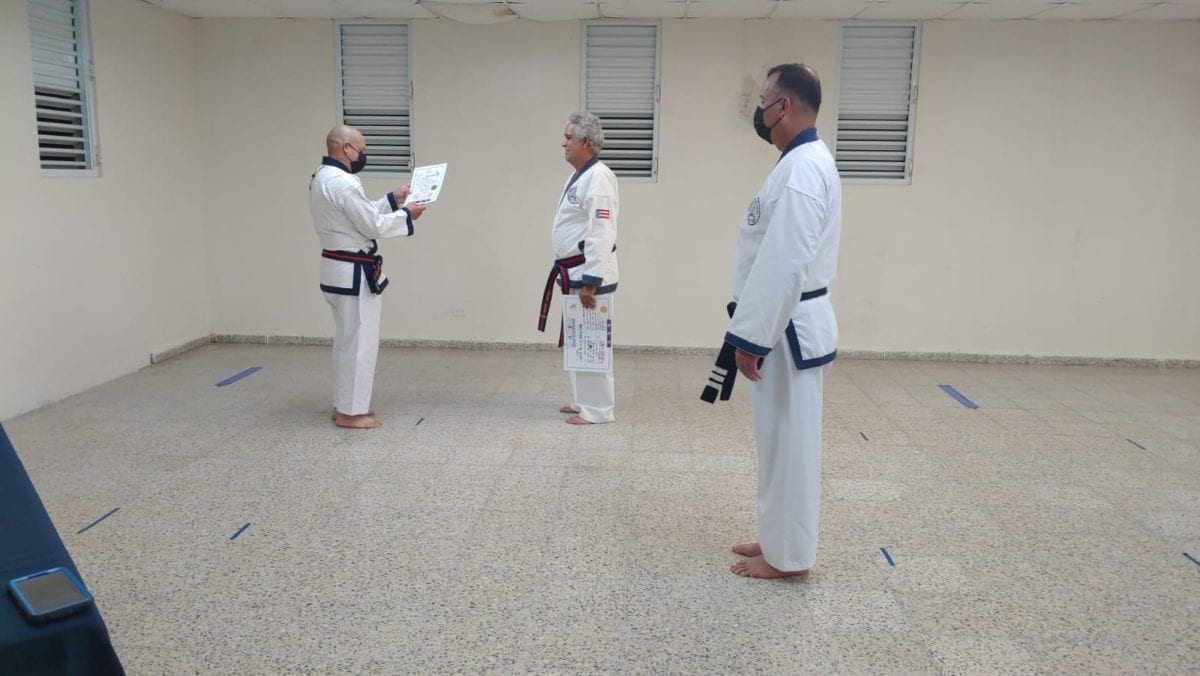 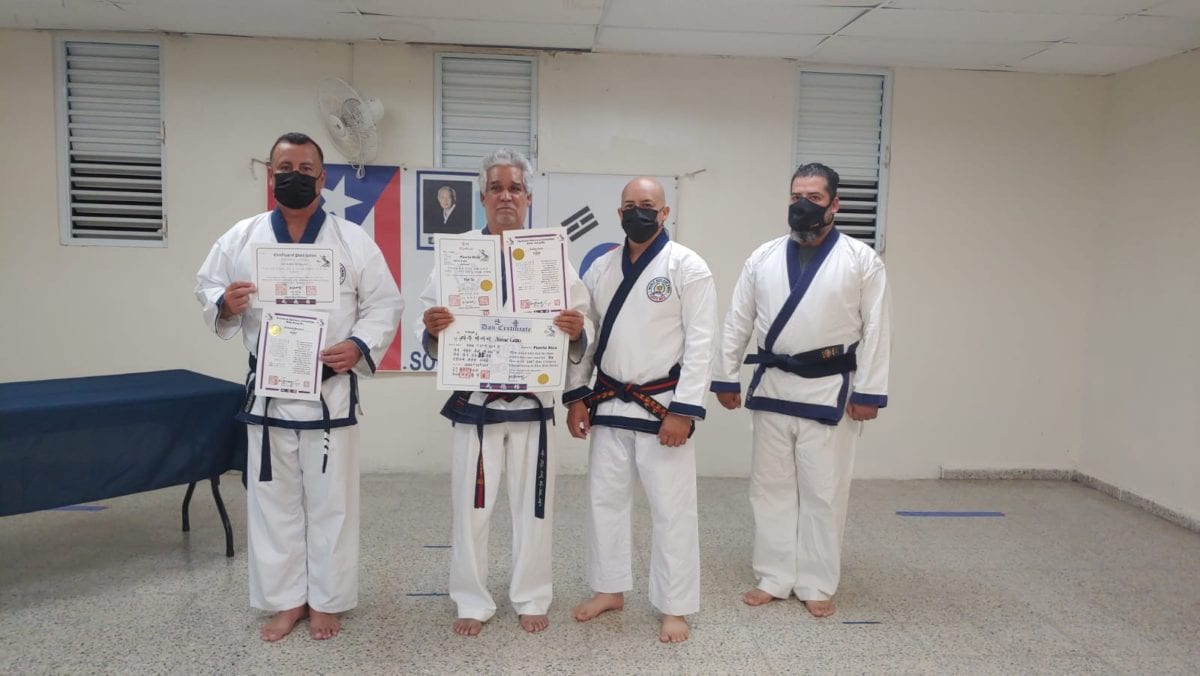 Philippine Moo Duk Kwan Soo Bahk Do Incorporated Our heartfelt condolences to the family of K[...]

WOMEN IN THE MOO DUK KWAN® - Pioneer Women of the Moo Duk Kwan, Past, Present and Future

Pioneer Women of the Moo Duk Kwan®Past and Present and Future.  For those who don't know, the Wome[...]

Sergeant James Barton Hambrick, Jr., was awarded the Purple Heart for being wounded in action, dur[...]

Honoring our Women in the World Moo Duk Kwan during this 75th year of the Moo Duk Kwan.  Click on th[...]

On behalf of Debby Brnich KSN and the Brnich family, and with deep sorrow, I share the sad news [...]