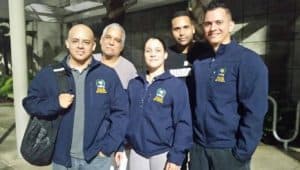 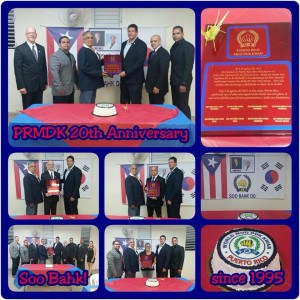 The Puerto Rico Moo Duk Kwan recently celebrated their 20th Anniversary as a member of the World Moo Duk Kwan.  Congratulations to our Designee, Oscar Rosado, Sa bom Nim and his loyal students for supporting the art of Soo Bahk Do Moo Duk Kwan for 20 years.

From humble beginnings to steady expansion, the PRMDK has continued the tradition of training in the philosophy of Moo Do established by the Founder, Hwang Kee, more than 70 years ago (Established in 1945).

Just to provide some history, the Puerto Rican Moo Duk Kwan has been in existence since 1978, when Mr. Francisco Nieves, Mr. Teddy Mendez and Kyo Sa Nim Richard Morales started training on the island.  Kyo Sa Nim Morales made contact with H.C. Hwang, Kwan Jang Nim to join the World Moo Duk Kwan and get evaluated for membership.

In 1990, in the US Federation Newsletter, William Diaz, Jr., Sa Bom Nim, featured the Puerto Rico Moo Duk Kwan in our newsletter and had personally visited the island to support the membership.  Despite government intervention, legal obstacles and financial difficulties, the Puerto Rican Moo Duk Kwan was reorganized in the 1990’s under the leadership of Pedro Vangas, Jr., Sa bom Nim, who eventually left the World Moo Duk Kwan.

In 1991, Kwan Jang Nim H.C. Hwang, Frank Bonsignore, Sa bom Nim, and myself visited the island and were hosted by Vangas Sa Bom Nim, and Mr. Jaime Lazu, where they participated in training and evaluations conducted by the Kwan Jang Nim (at the time, Chairman of the TAC).

However, the current Designee, Oscar Rosado, Sa bom Nim, along with very loyal Moo Duk Kwan practitioners, Mr. Jaime Lazu and his son, Abimael, continued to give the Puerto Rican Moo Duk Kwan renewed life and vision to continue training under the guidance of the Kwan Jang Nim H.C. Hwang.

In 1995 and in 2005, the Puerto Rican Delegation to the Moo Duk Kwan Anniversary events in Seoul, Korea, represented themselves with outstanding demonstrations before the Founder, and our current Kwan Jang Nim.  In 2011, Designee Master Rosado attended the Ko Dan Ja Shim Sa in Ramona, California and went back to bring new life into the Moo Duk Kwan membership on the island.

Recent promotions of two more Ko Dan Ja on the island has increased the exposure and involvement of the membership, the newest addition to the Ko Dan Ja ranks are Master John Lynch and Master Jim OClass, both recently completed the week long Ko Dan Ja Shim Sa in Ramona, California.  Congratulations to the new Masters.