World Moo Duk Kwan® sincerely extends our sincere condolences to the Cheezic Family and to the Cheezic Tang Soo Do Organization leadership and all his students. 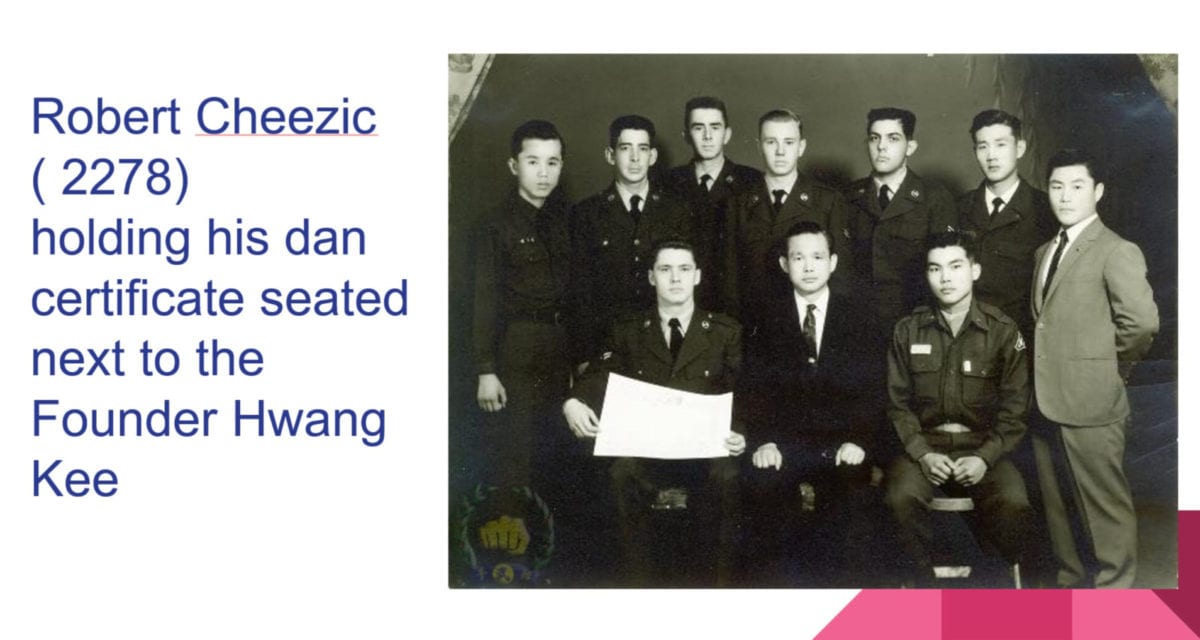 The photo above represents Grandmaster Robert Cheezic (seated with certificate in hand) as he was presented with his 1st Dan Black Belt papers by Grandmaster Hwang Kee, the Founder of Tang Soo Do. This October 1960 photo, taken in Korea, also includes Grandmaster Cheezic's personal Instructor, Jae Chul Shin (standing 2nd from the right in the back row). One month after this photo was taken, Grandmaster Cheezic returned to Waterbury, Connecticut where he began teaching Tang Soo Do.

It is with a heavy heart that we share with you that we have lost a great man, leader, mentor and friend when Grand Master Cheezic passed away this afternoon.  Please honor the privacy of the family but keep them in your prayers.  Once we hear anything on arrangements we will post further information.

It has been said that martial artists are not born: they are made. Their identities emanate from those who guide them in their studies. Grandmaster Robert A. Cheezic has spent the last forty-five years educating more than twenty-five thousand martial artists worldwide. He has promoted over two thousand black belts, has fiercely championed the cause of martial arts training for the specially challenged and is internationally respected for his efforts. In the midst of all this success, however, he remains humble – content to make big differences in ordinary ways. Teacher, husband, father, grandfather and mentor, Grandmaster Robert Cheezic embodies his own mantra, “Leave more than you take.”

Born January 2, 1939 in Pittston, Pennsylvania, Robert Allen Cheezic moved to his adopted hometown of Waterbury, Connecticut when he was just five years old. An energetic and athletic youngster, he attended Leavenworth High School where he excelled in sports, earned varsity letters in football and baseball, and served as Vice President of his senior class. After graduation, Cheezic joined the United States Air Force and reported to Stewart Air Force Base in Newburgh, New York where he remained for two years. In 1959, he was deployed to Osan Air Force Base in South Korea, and encountered a man who would alter the landscape of his life forever. Korean native, Jae Chul Shin, was teaching martial arts to American soldiers on base. Fascinated by what he saw, Cheezic gained entry to the club, where Shin took him in as a student. In 1960, Cheezic was awarded Moo Duk Kwan Tang Soo Do black belt number 2278 by the style’s founder, Hwang Kee. Among the first Americans to earn black belt distinction in Korea, Cheezic's classmates included Bob Thompson, and actor Carlos (Chuck) Norris, with whom he has remained friends. He returned to Waterbury, Connecticut after discharge from the U.S. Air Force, overcome with a desire to share what he learned with others. Cheezic worked full time at the Anaconda Brass and Atlantic Richfield Companies during the day and taught Tang Soo Do in the evenings in a school gymnasium before opening his own studio, The American Tang Soo Do Academy. It was the first Tang Soo Do dojang ever established in the Northeast region of the United States. 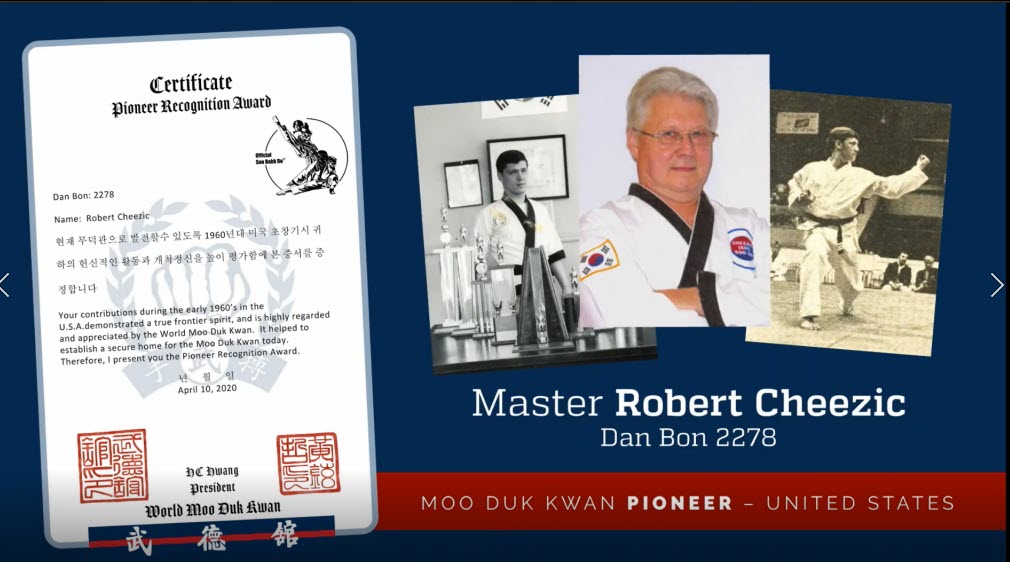 From All of us, to All of you and your families, a Joyous, Spirited, and Safe Holidays. SOO BAHK! [...]

This is the last day of the Virtual Celebration of the 75th Anniversary of the Moo Duk Kwan.  This[...]

Opening Ceremonies for the 75th Anniversary of the Moo Duk Kwan and the Seminars conducted by Kwan Jang Nim H.C. Hwang

Welcome to the 75th Anniversary Virtual Celebration of the Moo Duk Kwan.  It is not to late to regis[...]

As we draw closer to the 75th Anniversary of the Moo Duk Kwan, we hope you enjoy these celeb[...]

As we draw closer to the 75th Anniversary of the Moo Duk Kwan, we hope you enjoy these celebratory v[...]

As we draw closer to the 75th Anniversary of the Moo Duk Kwan, we hope you enjoy these celebratory[...]
Scroll To Top
We use cookies to ensure that we give you the best experience on our website. If you continue to use this site we will assume that you are happy with it.AcceptPrivacy Policy