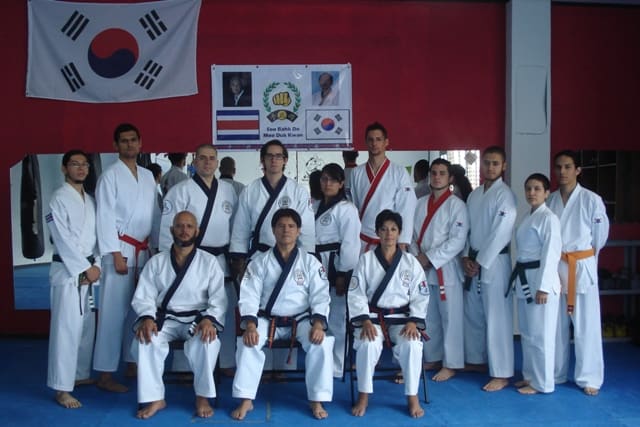 I hope to find you, Sir, in the best of health and in good spirits.

I have recently returned from the Moo Do Visit to Costa Rica.  It was quiet an inspiring experience to have finally have met in person with Mr. Leonardo Barboza Rodríguez.  He received our SBD MDK Team from Mexico very well, all within his economical possibilities.  Our team consisted of Ruth Barriga Sa Bom, Anthony Kyung Guzmán Kyo Sa, Jaime Ambriz and Sandra Ruiz and of course myself.  We were attended very well by Mr. Leonardo Barboza and his students.  After arriving to the Capital City of Costa Rica being that of San José we were taken in two vehicles to a small town of Coronado where Mr. Leonardo Barboza lives and has his Do Jang. The Do Jang is located in what is called a Sports Center close to the City´s main plaza, some what like in Europe, where the area of the Do Jang is rented to other Martial Arts on different days and hours.

It seems that Mr. Leonardo Barboza is spear heading this new tendency with his few students to follow the WMDK and to learn the protocols and techniques of the SBD MDK. Because of the Táng Soo Do training that Mr. Barboza and his students have, their knowledge of Offensive and Defensive Huh Ri was very well accepted and it seems that the transition from that system to the SBD will be much more easier than the transfer members of Mexico are influenced by TKD. As we finished our last theme Friday night I presented the Study Guides to Mr. Barboza and he was highly impressed knowing that this Gift came from your behalf, Sir!  He was overly surprised and overwhelmed that he broke into Tears!

That evening Mr Barboza then had his students present their Yu Gup Ja Shim Sa which he presided and afterward we set the Protocols for the 1st Yu Dan Ja Shim Sa of the WMDK in Costa Rica.  Mr. Barboza was the only Candidate for this Shim Sa, His Technique is very much of a medium-hard Táng Soo Do style.

Our team and myself were suppose to travel to another city and impart the same Seminar the next day but the instructor, Hector Aguero Barboza, in the other city was taken to the hospital and treated for a Diabetes Disorder.  So we concentrated our effort in the small town of Coronado.

Early the next day, Saturday, we had a nature walk up to the Clouds “Nubes” and a quick visit to the City of San José the Capital which was down hill. Wwe used the surburn bus transport and we were really surprise that even in jungle and woods the bus has a strict schedule to maintain. After this up to the Clouds and down to San José we returned to continue mid day with the SBD MDK Training and on till about 9pm. This concluded our training and had a Victory Dinner and prepared to leave the next day, Sunday 26th.  By 9pm Sunday night our team had returned back to Mexico City and me to Guadalajara.

I am annexing a, Report from Mr. Barboza, Report from the TAC that accompanied me to Costa Rica which I have translated, Letter of Recommendation and Photos.

Thank You, Sir, for having given me this opportunity to contribute to the Mission 2000.

Sincerely in the Moo Duk Kwan

To view a short video of this historical moment, click the link below. Moo Duk Kwan® President H.C. Hwang shares the definition and his insights about the Key Co[...]